..and here is the problem:

Authored by Michael Snyder via The Economic Collapse blog,
We have never seen anything like this before.  According to satellite data that was just released by Reuters, “at least 1 million acres of U.S. farmland” were covered by water for at least seven days this month.  That is an agricultural disaster without equal in modern American history, and yet the mainstream media is treating this like it is some sort of second class story.  It isn’t.  This is the biggest news story of 2019 so far, and people want to know what is going on.  A few days ago, I posted a story entitled ‘“As Many As A Million Calves Lost In Nebraska” – Beef Prices In The U.S. To Escalate Dramatically In The Coming Months’, and it has already been shared on social media more than 145,000 times.  Farming communities all over the central part of the nation now look like war zones as a result of all this flooding, but the media elites on the east and west coasts don’t want to write about it.  And with more flooding on the way for the next two months, this crisis is only going to get worse. 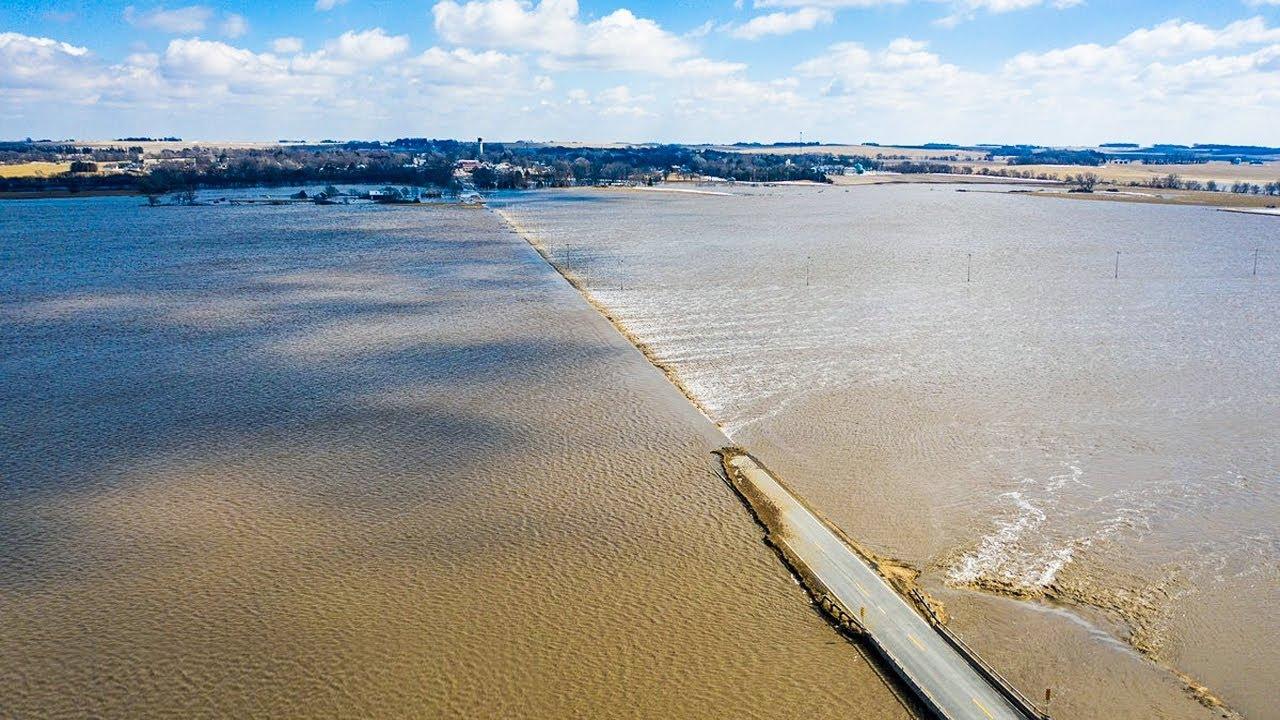 This is the time of year when farmers are gearing up to plant wheat, corn and soybeans, and now a substantial portion of our farmland will not be able to be used at all this year.  According to Reuters, at least a million acres of farmland were covered by floodwaters for at least seven days this month, and that “will likely reduce corn, wheat and soy production this year”…

At least 1 million acres (405,000 hectares) of U.S. farmland were flooded after the “bomb cyclone” storm left wide swaths of nine major grain producing states under water this month, satellite data analyzed by Gro Intelligence for Reuters showed.
Farms from the Dakotas to Missouri and beyond have been under water for a week or more, possibly impeding planting and damaging soil. The floods, which came just weeks before planting season starts in the Midwest, will likely reduce corn, wheat and soy production this year.

And with “as many as a million calves” lost to the flooding, a lot less food than anticipated is going to be produced in the United States for the foreseeable future.
Between March 8th and March 21st, almost 1.1 million acres of cropland and over 84,000 acres of pastureland were covered by water for at least a week.  With more rain on the way, it is essentially going to be impossible for most of those acres to be usable this year.
In Iowa, 474,271 acres were covered by floodwaters for at least seven days in March, and Iowa farmers are facing some very tough deadlines.  Corn must be planted by May 31st and soybeans must be planted by June 15th in order to qualify for flood insurance.  For most Iowa farms that were covered by floodwaters, that is going to be impossible.
Overall, the recent flooding caused “at least $3 billion” in economic damage according to authorities, but many believe that the final number will be far higher.
Thousands upon thousands of farms have been completely destroyed, and thousands upon thousands of farmers will not plant any crops at all this year.
In addition to the vast agricultural devastation that we have witnessed, thousands upon thousands of homes have been destroyed as well, and now the National Ground Water Association is warning that “the safety of more than a million private water wells” could be compromised…

Record flooding in the Midwest is now threatening the safety of more than a million private water wells. The National Ground Water Association estimates that people living in more than 300 counties across 10 states have their groundwater threatened from bacterial and industrial contamination carried by flood waters.

If you live in the middle of the country and there is a chance that your well may have been compromised, please don’t take any unnecessary chances.  Contaminated water can be really, really bad news.
Unfortunately, this is just the beginning.  According to the NOAA, we are entering an “unprecedented flood season” that could potentially “impact an even bigger area of cropland”…

Spring floods could yet impact an even bigger area of cropland. The U.S. government’s National Oceanic and Atmospheric Administration has warned of what could be an “unprecedented flood season” as it forecasts heavy spring rains. Rivers may swell further as a deep snow pack in northern growing areas melts.

In my previous article entitled ‘”200 Million People At Risk: National Weather Service Warns Apocalyptic Midwest Floods Are “A Preview Of What We Expect Throughout The Rest Of The Spring”’, I included a map from the NOAA which shows which areas of the central part of the country are projected to receive unusually high levels of rainfall over the next few months.
Unfortunately, there is a tremendous amount of overlap with areas that have already been devastated by flooding.
On Friday and Saturday, there will be “more heavy rains” in the Midwest, and Nebraska is in “the direct path” of the center of the storm…

From the Central Plains to the Midwest, it has been a disastrous spring for river flooding. A weather system slated to bring more heavy rains Friday into Saturday could aggravate the situation along and near the Missouri and Mississippi rivers.
It’s a one-two punch that combines additional rainwater with fresh runoff from snowmelt. Perhaps worst off is Nebraska, in the direct path of Friday’s quick burst of moisture. Barely a week has passed since Gov. Pete Ricketts estimated the cost of ongoing flooding in that state at more than $1 billion.

This is it.  America is being hammered by one storm after another, and I very much encourage you to get prepared for a very rough ride ahead.
There is going to be a lot more flooding.  Prices for beef, dairy, wheat, corn and soy products are going to rise significantly, and just when you think they are way too high they are going to keep on rising.
This is already the worst agricultural disaster in modern American history, and federal authorities are telling us that we should expect things to continue to get worse for at least two more months.
Perhaps the mainstream media will eventually decide to take this story seriously, but until they do those of us in the alternative media will do our best to keep you updated.
========================================================
If You want sudden emergency help, pls don´t hesitate to contact ASAP:
For direct solution pls click on this link to Rosary´s shop for buying a white label patent license to overcome flood damage.